Using mechanical shearbolt connectors, such as Pfisterer Sicon, the cable joints can be used with both metric and AWG/kcmil specification conductors.

Where no “hot-working” is permitted in hazardous areas and potentially explosive atmospheres but hydrocarbon resistant resin cable joints are not required, we can recommend Cold Shrink type cable joints for cable connections, joints or repairs.

The ATEX Directive covers an extensive range of equipment used on oil and gas platforms, petrochemical plants, mines, flourmills and other areas where a potentially explosive atmosphere may be present – these are commonly referred to as “hazardous areas” and categorised according to the potential explosion risk into Zones under the European Directive known as ATEX.

In very broad terms, there are 3 pre-conditions for the ATEX Directive to apply to the
electrical equipment and cable accessories for use in potentially explosive atmospheres and hazardous areas:

a) must have its own source of ignition;
b) be intended for use in a potentially explosive atmosphere (air mixtures); and
c) be under normal atmospheric conditions.

Although cable joints are not formally certified according to ATEX there are several minimum specification and performance requirements for cable joints when being used to connect, repair or joint cables in hazardous areas. Standard industrial cable joints will not provide adequate electrical insulation and mechanical protection – they utilise polyurethane resins which are not hydrocarbon resistant and will suffer chemical and molecular breakdown overtime when exposed to aggressive and corrosive atmospheres. Eventual failure of the cable joint will cause power outage and the need to cut-out the failed cable joint and re-joint using a suitable product.

These type of cable joints are suitable for cables with the following Ratings & Approvals: 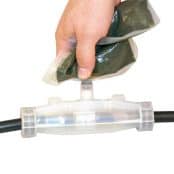