Re-enterable cable duct seals are easy to apply regardless of the type of cable scenario in the cable ducts as it uses a strong but flexible hexagonal tube structure to support the cable and provide a strong backing for the cable seal.

The duct seal system provides waterproof and gastight sealing of LV-HV and 11kV-33kV power cables into ducts. The FiloSeal+HD is suitable for any cable configuration (single, trefoil cables or multiple cables) contained within one duct and also allows for easy re-entry of the duct seal to add or remove cables or pipes as required.

Filoform Filoseal+HD is covered by a Test Report documenting successful pass status at Nedlab Laboratory for the following – this is based upon using Filoform’s hexagonal support system and sealing cable using their MD+ sealant.

Steve Groocock is the Duct Seal Product Manager at Filoform. Below he explains about attending a data centre site where he provided installer training prior to the installation of Filoseal +HD Re-enterable Duct Seal System.

“A skill is something that is learned over a period of time but sometimes it is best to pass along experience to a new user of any equipment, this includes cable duct seals. Recently, I attended site for a company who were working on the LV cabling associated with a new build data centre into an existing building structure.

The LV cable, ducting and electrical distribution system utilised existing switch rooms where possible but in order to add capacity to these areas, new penetration holes for the cabling needed to be added. These holes were core drilled directly through the existing structure. Once the cables had been pulled, there remained clear passages for the ingress of moisture, gas, dust and rodents into cable ducts.

Taking the strips of adjoined hex tubes, insert them around and between the cables to be sealed ensuring the spacing required is maintained – the strips can be inserted as a flat line or rolled to form a tight group of 5. If space is not available, the strip of hex tubes may be torn down to individual hex tubes.

Start at the bottom of the cable duct with the large blue tubes and build up to completion. Should there be heavy cables in the ducts, such as 11kV/33kV high voltage power cables, the hex tubes can be nested i.e. one small tube placed inside the other larger tube. The small light blue hex tubes are used to fill and seal the remaining small gaps in the cable duct. The installer should ensure the tubes are packed tightly to prevent cable movement.

Filoseal+HD duct sealing kits have been tested to provide watertight, gastight and/or fire resistant cable seals and were thus specified to fill in the voids in the concrete core drilled holes at the data centre.

Training took two hours and in this time it was up to me to pass on as much experience as possible at a steady pace so the new installer could take it understand and adopt the knowledge. The installer had previously not seen a duct sealing system like this so I took time to familiarise them with the component parts and how a finished cable duct seal installation should look like by way of a sample in a clear duct replica. I also showed the excellent Filoform HD installation video which can be viewed below.

Once we had seen the video and experienced the component parts of the duct seal we started to seal one side of one cable duct. The customer will be sealing both sides of the cable duct wall – we can see this in the pictures upon insistence from their end client.

The hands on training starts with myself and the trainee cleaning and abrading the cables and cable duct for the first 20-25mm inside the hole in the wall – cleaning cloth is provided with the duct seal kit. Preparation is key to the whole system – the most important point I stressed to achieve a hexagonal backing piece between each and every cable to create a reliable water and gastight cable duct seal.

The hexagonal tubes are placed around the cables to be sealed filling up all the gaps using the large and small hexagonal backers to ensure the cable support system is compact and tight resembling a honeycomb structure.

This is explained in the Video and instructions supplied with the duct seal kit but until seen it is not necessarily clear as to why. The space is there to ensure the duct sealant component, called Filoseal MD+, can reach all the areas of the void or cable duct needed to be sealed. This site was particularly challenging as the low voltage cables were held down close and clamped to the work face by cable cleats. However, I moved to the other side of the wall and moved the cables in a pit until my trainee could get the hexagonal pieces between each and every cable and between the cables and the core drilled hole edge.

Here the cables are pictured clamped to the cable channel using trefoil cable cleats as the cables depart the duct which was sealed using Fioloseal type duct sealing mastics.

This is the end of stage one. Once we both looked and examined the backing ensuring there were gaps around the cables to be sealed as specified, we moved on to the addition of the sealing mastic. The cable sealing mastic can be applied using a standard mastic gun, however we recommend investment in a quality installation gun. Once the sealant mastic is loaded in the gun I demonstrated on the lower half of this cable install how to ensure a cable seal by running a good bead around the hole edge on every cable. Once we had gone through several tubes of mastic we brought out the finishing sponge to wipe down and tidy the mastic finish – the duct sealant can take from 4 to 20 days to fully cure depending on local ambient temperatures and air humidity levels. Typically in the UK curing takes 8-20 days and backfilling of the installation should be avoided until at least 10 days after installation.

When backfilling ensure adequate packing is below the sealed cables in the duct before adding materials above the cables. In a vertical cable duct, group together strips or rolled groups of tubes and squeeze them into the a duct as one single unit.

Then proceed to maintain the required cable spacing by adding either large or small tubes (groups of or singly).

The mastic should be patted in and around every cable ensuring each and every part of the cable duct seal was treated the same way – this patting motion encourages the cable sealant mastic to adhere to the hexagonal backing. Final checks led me to further pat parts between cables using the sponge edge.” 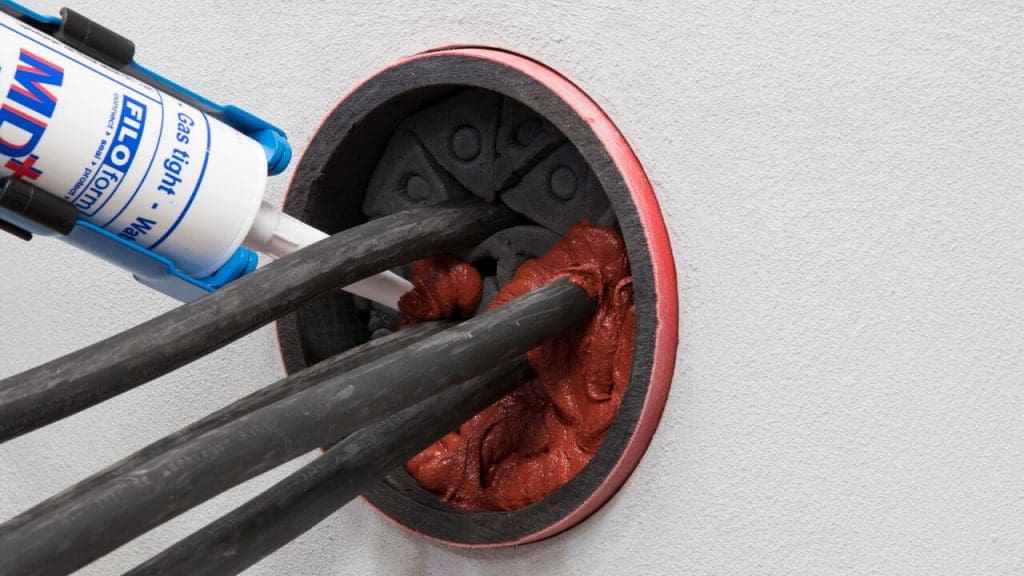 Provides advanced and assured sealing against water and gas for cable ducts, bore holes and openings 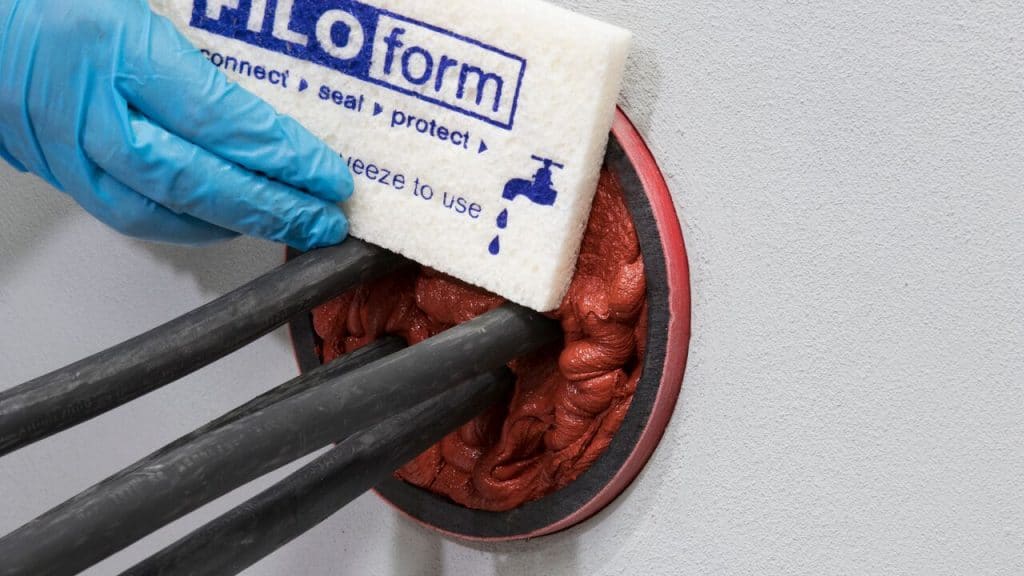 Filoseal+HD duct seal system using MD+ has been heavily tested against pressure, pulling forces, chemicals, gases and hydrocarbons for use with low, medium and high voltage cables. Below we can summarise the results from Nedlab Laboratory Test Reports.

Final Pressure Test – after completion of the bending and pull strength test the cable duct seals are tested at a pressure of 2.0 Bars.

Note the Test Results documented above have been done in accordance with Filoform installation instructions, however values achieved in field installations can vary if the instructions are not followed and results may vary depending on cable and duct tolerances such as cable duct size, material and cable density volume.

Since 1985, T&D have established an international reputation based on SERVICE | INTEGRITY | TRUST.