Trefoil cable cleats, from the BICON range manufactured by Prysmian, are installed to support and retain three phase cable formations where the power is distributed by three single core cables, rather than a single multicore cable.

Trefoil cable formation according to IEC61914 is “the formation of three cables so laid to be mutually equidistant. Viewed in cross-section, the lines joining the cable centres form an equilaterial triangle.”  The range of trefoil cable cleats distributed by Thorne & Derrick have been successfully tested and certified in accordance with IEC61914 – the cleat testing includes subjecting the trefoil cleats to extreme short circuit and electromagnetic force levels.

Trefoil cable cleats should be physically tested in an applied test where a section of three LV-HV power cables are retained with the trefoil cleats and then exposed to a 3 phase short circuit – short circuit fault conditions for single core cables installed in trefoil formation result in high dynamic electromagnetic forces: the trefoil cable cleats will safely support and hold the cables to the cable management or containment system reducing risk of accident or injury to people or building assets.

Short circuit faults in LV, MV or HV power cable networks in 3 phase systems cause an initial period of extreme asymmetry which dissipates to a steadier more symmetrical state – the extent of asymmetry depends on when in the cycle the cable fault is initiated and also the nature of the short circuit fault, e.g. 3 phase to earth.

The short circuit “peak” is the maximum current value achieved in the initial asymmetrical phase and it is at this point that the highest instantaneous force between the cable conductors occurs.

The installation of the correct cable cleats will ensure that electromagnetic forces caused by a fault current are adequately controlled by a suitably rated short circuit level cleat – the forces generated between the conductors of three separate single core cables laid or installed in a trefoil arrangement will be restrained by the trefoil cleat.

A short circuit is an electrical circuit that permits a current to travel along an unintended path often where essentially no (or a very low) electrical impedance is encountered – this unintended or abnormal path of negligible impedance can be between love conductors, or between a live conductor and an earth, which have a difference in potential under operating conditions.

BS EN 61914: 2009 (IEC 61914) provides a formulae which allows electrical engineers and specifiers to calculate the maximum force on a cable conductor.

Short circuit tests in accordance with BS EN 61914: 2009 (IEC 61914) are performed on the most critical cable cleat size within its cable acceptance range. 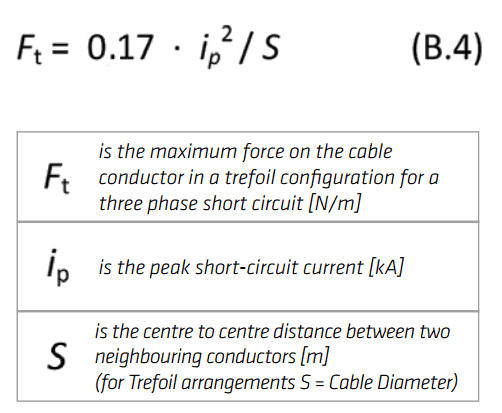 Trefoil cleats must be spaced at calculated and regular intervals and able to withstand forces generated by short circuit circuits in 1,000 volt, 3.3kV, 6.6kV, 11kV and 33kV cable systems.

Maximum short circuit current values apply to each design of trefoil cable cleat – if a LV, MV or HV cable system includes larger cables or has a lower fault current the cable cleat spacings can be increased.

As a general rule a maximum cable strap/cleat spacing of 900mm is recommended for trefoil cable cleat installations – contact T&D to discuss your cable cleat requirements.

Eddy current generation at mains power frequencies requires a complete electrical and ferro-magnetic circuit around each conductor, whether LV, MV or HV. Where single core cables are contained within the same cleat in three phase configuration e.g. three cables in a trefoil cable cleat, the magnetic fields of the phase cancel each other out, which in turn negates the eddy currents and the heating effect.

Despite this, it is recommended to use cable cleats from non-magnetic materials such as aluminium, injection moulded polymers or stainless steel, which exhibits only slight magnetic properties.