Roxtec RS PPS Cable Seal is a back-to-back solution for openings with plastic pipes in walls, floors, decks and bulkheads – the Roxtec cable seal kits consists of two seals and one intumescent sealing strip and is used with a SL PPS sleeve.

Contact T&D should you require support on the installation of Roxtec RS PPS cable seals:

5. Tip: Lubricate the pipe with Roxtec Lubricant to ease the sliding
6. Move/slide the strip into the sleeve and as close to the center as possible. For sustained water tightness after fire exposure applications place one intumescent strip as close as possible to each RS seal
7. Adapt the seal to the pipe by peeling off layers from the halves until you reach the gap seen in pic.8. The halves may not differ by more than one layer
8. Achieve a 0.1-1.0 mm gap between the two halves when held against the pipe

9. Lubricate thoroughly on the inside surfaces and sparsely on the outside of the seal
10. Insert the halves one by one into the sleeve. Make sure the intumescent material stays in the center of the sleeve. For installations having sustained water tightness after fire exposure make sure that the intumescent strips are as close to the RS seals as possible
11. Tighten the screws crosswise. The seal will compress and seal the transit. 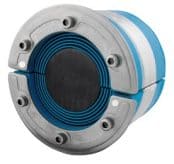